This week, the ASI ‘Bootcamp’ where 50 young sommeliers from across the world were trained took place in Kuala Lumpur, Malaysia. Among the sponsors were Torres, Wines of California, Famille Perrin, Graham’s Port and AdVini and Wines of Moldova who also joined our awards this year as the WTA Guide Sponsor.

Today, the world media calls Moldova ‘Small Country; Big Heart’. To a large extent, this expression was assigned to Moldova for the very reason that the leadership of Wines of Moldova on the international arena demonstrates high standards of partnership and a spirit of solidarity. And now, Wine Industry Manager at USAID Competitiveness Enhancement and Enterprise Development II Project (Moldova), Diana Lazar took the noble initiative to invite winemakers from the neighboring country which suffered from Russian aggression to the ASI ‘Bootcamp’ in Kuala Lumpur. Thanks to this support, wines of the Family Winery ‘Shabo’, WTA nominee in the Brand – the Visiting Card of the Country category, were featured there.

The second for the ASI Bootcamp gathered around 50 promising sommeliers from different corners of the world for two and a half days of intense education and training. They covered various subjects – from organic wines and California sub-appellations to the minutiae of sparkling wine service, and tutors included such prominent personalities in the world of wine as the world’s top sommelier Mark Almert and Toru Takamatsu, the youngest Master Sommelier in the world.

Wines of Moldova joined the event with a tasting co-hosted by British wine expert, consultant, Meininger’s associate editor, WTA Jury, Robert Joseph who first visited the country in the Soviet era of 1988.

Since the beginning of the full-scale Russian-Ukrainian war, sending samples has been almost impossible, that is why Giorgi Iukuridze, Shabo’s co-founder, personally delivered two bottles – 2017 Grand Millésime Cabernet Sauvignon and a white from the local Telti-Kuruk grape – to Lazar’s office in Chisinau, the capital of Moldova. 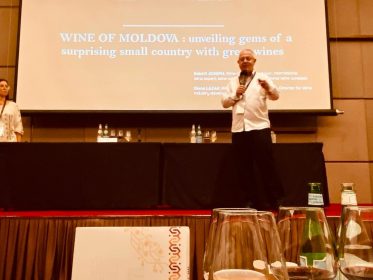 Being one of the smallest, poorest nations in Europe, Moldova has welcomed over 200,000 refugees, since the full-scale war has burst out in Ukraine. The Moldovan wine industry, which directly or indirectly employs 15% of the 2.5m population, has been particularly involved, finding space in its facilities for thousands of Ukrainians.

In October, Moldova’s National Wine Day will switch to the international format as for the first time, Ukrainian wineries, including Shabo, will become part of this annual Moldovan event attracting 100,000 visitors.

The efforts of Moldova and Ukraine in Malaysia seem to have borne fruit. The sommeliers were impressed by the unfamiliar tastes of the Moldovan varieties of Feteasca and Rara Neagra reds, as well as the Ukrainian Telti-Kuruk.

We are proud that our sponsor, judge and nominee have come together in such a collaboration. This is precisely the mission of the Wine Travel Awards – to unite the most progressive, modern and positive wine thinkers.